Yesterday’s press briefing focussed on global warming, the Sudan and Bangladesh. But we were given information about changes in the Instruments of Communion before the three Primates present spoke.

The Province of the Indian Ocean is celebrating because the number of members has risen about 250,000, entitling the Province to two members on the Anglican Consultative Council. 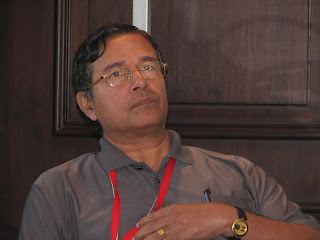 The Primate of Bangladesh, the Rt Revd Paul Sarkar, described the environmental pollution which is having a destructive effect – arsenic poisoning and deforestation. They are a tiny church but doing good work despite their small size. 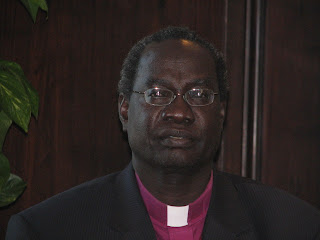 The Primate of Sudan, Archbishop Daniel Deng spoke at the press briefing of the letter which the Sudanese bishops had written to the Primates. The Peace and Reconciliation Commission of the Church of Sudan is one of the largest civil organisations in the country.

The border between the north and south is still not demarcated and there is tension between the north and south governments. One town of 50,000 people has recently been destroyed and the people displaced twice. He would like the Primates to maintain pressure on the government to implement the peace process and bring peace to Darfur. The church in the Sudan has en extensive reach on the ground in the Sudan and access to information that is often lacking to the government. Returning refugees have no access to water, health care or education. He invited people from across the Communion to come to the Sudan and witness for themselves the situation the church is responding to. Archbishop David Moxon was left until last to talk briefly about the Primates’ response to global warming. Time was short and his words were sketchy – they considered the moral leadership they might offer, joining the fight against global warming, preventing carbon emissions, all as an act of participation in God’s creation.

David Virtue wonders why I continue to mention him here on the CA blog. It’s because he has asked questions and made comments which astonish me at every press briefing. Yesterday, his question to the Archbishop of Sudan was about homosexuality and the statement made at the Lambeth Conference. The crisis in the Sudan seems of little import to David compared with the Anglican Communion’s engagement with homosexuality. Who fuels this conflict over sexuality? Not most of the Primates and not those working patiently for LGBT inclusion. It is obsessive individuals from the Episcopal Church.

David’s comment on a briefing which had considered Darfur, Bangladesh and global warming: “Another non-event.”
Posted by Colin Coward at 09:52