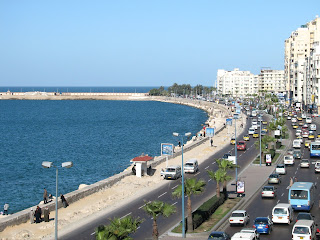 It took some time yesterday to find the Helnan Palestine Hotel. The non-English speaking cab driver knew where the Montazah Palace Gardens were, and took us there through heavy traffic on the road fronting the sea. We eventually tracked the hotel down, hidden at the far end of the gardens at the tip of the Peninsular. You have to pay, E£5, or 50pence, to enter the gardens, and the entry fee combined with the hidden location and the three mile cab ride from downtown means the Primates are as distanced from the town centre of Alexandria as they were in Dar es Salaam. 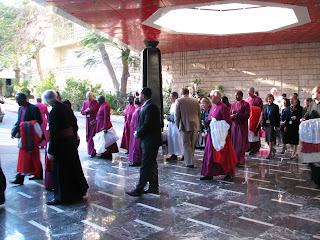 Having reached the hotel, the environment is very different from Dar. There are no security guards and no security at all beyond the hotel’s futile security arch. The Primates are meeting in a room directly off the hotel lobby, and access is fully open. The first person I sighted on arrival in the hotel lobby was David Virtue, sitting blogging – no change from Tanzania there. Communion Office staff began to appear, and then various Primates, gathering their belongings in preparation for the coach ride to St Mark’s Pro-Cathedral where they were participating in a service of dedication.

What does this radical change in security arrangements mean? Why was it felt to be so necessary just two years ago for the Primates to meet in an exclusive environment and to be protected by a permanent squad of security men, who challenged anyone daring to come too close. Very few Primates in Dar es Salaam ventured from their side of the hotel to the public domain.

There are very few reporters here – David Virtue for Virtueonline, George Conger for the Living Church and Church of England Newspaper, Riazat Butt for the Guardian, Matthew Davies for the Episcopal News Service and Paul Feheley for the Anglican Church of Canada. They are all familiar faces, and friends to one degree or another. Perhaps the lack of interest by the media is one reason for reduced security, but I think it represents the beginning of a sea change in the Communion, about which, more later.
Posted by Colin Coward at 08:16