Rumour has it that the Primate of Nigeria was detained for two hours by Immigration authorities on arrival in Cairo, and was released only after the intervention of the Dean of Alexandria’s driver. He was then whisked off by car by one Revd Canon Julian Dobbs, who is not accredited to the conference but staying in the Helnan Palestine Hotel. Archbishop Akinola was previously refused entry to Jordan in 2008 for the GAFCON conference which then hastily decamped earlier than planned to Israel. 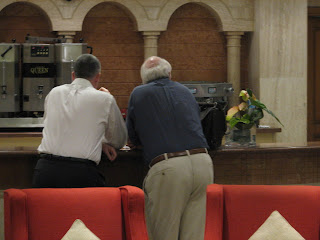 engaged in deep conversation with David V yesterday at the hotel bar, hastily breaking off when the Primates emerged from their afternoon session to grab ++Peter and hurry him down a corridor. He was later seen pushing a paper into ++Peter’s hand as he went to dinner.

Bearing in mind the absence of Chris Sugden et al, apparently on the instructions of the conservative Primates, Mr Dobbs’ presence is of considerable interest. He was appointed in December 2008 by The Convocation of Anglicans in North America (CANA) to the position of Canon Missioner.

"Mr. Dobbs works to establish a CANA Clergy Deployment Office, help Anglicans in North America to understand and engage with the challenges posed by the rise of Islam, and develop a mission partnership with West Africa for the development of Anglican clergy and lay leaders.”

An ordained Anglican priest, Mr. Dobbs was most recently the U.S. executive director for the Barnabas Fund, at which he developed awareness for the persecuted church and this growing ministry across the U.S. Julian Dobbs is quoted as saying:

“I am glad to join CANA at this critical juncture in the history of the Anglican Communion. As Christians, we face many challenges towards spreading the Gospel, and I am dedicated to finding ways to meet these challenges. One way to do this is to find and develop clergy who will stand for Biblical truth. Anglican Christians have great opportunities to spread the Gospel and CANA is leading the way.”

Is Mr Dobbs singlehandedly standing in for the conservative lobbyists, acting as their Go-Between to keep the conservative Primates `on message’ when they might be showing signs of wanting to follow a path of reconciliation?
Posted by Brenda at 09:21