Primates meeting Day 3 - On being Christian

Having posted the previous four reports and dealt with the business of the Primates meeting itself, I can allow myself a moment to reflect on more personal matters.

David Virtue proclaims his web site, VirtueonLine, to be “The voice for Global Orthodox Anglicanism.” If David’s style of Christianity is what the conservative Primates and leaders are advocating, then count me out.

David has referred to me in the two reports he has filed so far. In the first, he writes that Bishop Gene Robinson is mercifully not here, “but his representative thinking is here in the person of (The Rev.) Colin Coward of Changing Attitude, a British-based pansexual Anglican organization moving to have its abominable behavior brokered into the church.” In his second report he describes me as a “homogenital leader.”

A pansexual Anglican and a homogenital leader – why does David create words which are designed to be abusive and denigrate another Christian? Fortunately, David is not representative of the views of those conservative Primates and leaders he claims to be associated with. Nevertheless, he does claim to be to voice for orthodox Anglicanism, and many bishops and primates relate to him closely.

When I read David’s reports and those who comment on his blog and on Stand Firm, I wonder whether many of them share Christian values of love and truth with me. They seek to denigrate other Christians. Presiding Bishop Catherine Jefferts Schori is repeatedly referred to as Ms Jefferts Schori. This is deliberately and deeply offensive and childish. 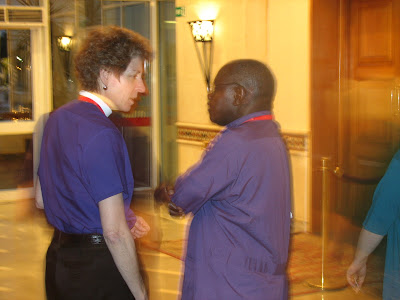 In the foyer of the Helnan Palestine hotel yesterday as Primates left their afternoon session, Brenda and I met various Archbishops, including John Sentamu who commented on my loudness as always. As we talked with Errol Brooks from the West Indies, David hovered proprietorially. I sensed his anxiety as we talked with a bishop who he deems to be “one of his”. I could be wrong, of course, but there is a pattern of behaviour which wants to see a conspiracy round every corner.

David is almost certainly encouraging “his” bishops not to give ground, to press for a covenant with teeth and punishment for the naughty North Americans. I hope the conservative Primates have independence of mind and deeper Christian love and generosity.
Posted by Colin Coward at 12:40