The first press conference was held at 6.30pm Monday in a smart conference room off the foyer of the Helnan Palestine Hotel. Archbishop Phillip Aspinall, the Primate of Australia, is the archbishop delegated to report the deliberations of the Primates to the media. 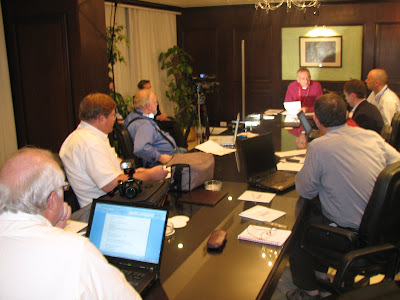 The meeting started with a good atmosphere, he said. There are tensions and issues we have to face but not the level of anxiety there has been at previous meetings. There is a lower level of anxiety and the Lambeth Conference in July last year may have made a difference. At Lambeth relationships were deepened and the bishops present showed that they are deeply committed to the Communion.

The Primates began with a quiet morning on Sunday. Archbishop Rowan focussed on the third chapter of the book of Revelation, the letters to the churches at Sardis, Philadelphia and Laodicea, to churches that were in a spot of bother or trouble. Is their experience a reflection of life in our churches now, he asked. The letters are salutary for us. He reminded the Primates of the note of promise which ends these letters.

I will follow this opening blog on the first press conference with a number of reports focussing on the Sexuality and Mission presentations, the Covenant, the Role of Primates and the other Instruments and Schism, ending with a commentary on the way in which some commentators cast other members of the Communion in a shockingly un-Christian light.
Posted by Colin Coward at 10:28